Raja Ampat
has many names; Four Kings; the crown jewel of the Coral Triangle;
the underwater Serengeti; the end of the rainbow (okay, that one
was us), but no name can quite do justice to the diving in
Indonesia’s Raja Ampat. Home to the highest marine biodiversity on
earth, descending into the water is like entering an underwater
Eden, thick with a flurry of life and vibrant, healthy corals
(hence the rainbow). And whilst there are so many unforgettable
dive sites that pepper the archipelago, read on for a few of our
favourites. 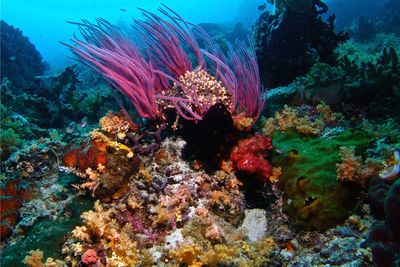 Boo islet looks rather lonely. Approach it by boat and you’ll
wonder what all the fuss is about – but dip below the waters and
you’ll see why. This iconic dive site owes its name to two swim
throughs that pierce the reef like giant windows. Aside from the
incredible topography (leaving many a diver to question how on
earth the above rock doesn’t collapse with such gaping holes), the
reef is carpeted with a rainbow display of soft corals that warrant
a whole day’s diving in themselves. 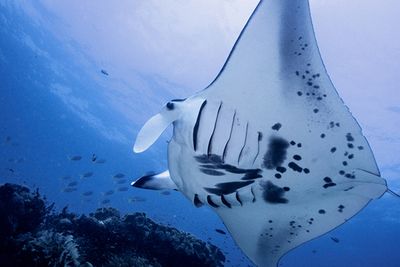 South of Boo lies Shadow Reef, a submerged pinnacle frequented
by a large number of one of the ocean’s most graceful creatures
(discuss): the manta ray. Position yourself at one of the cleaning
stations and watch both oceanic and smaller reef manta rays glide
past alongside nursing white tip sharks, napoleon wrasse and
schools of pelagics. 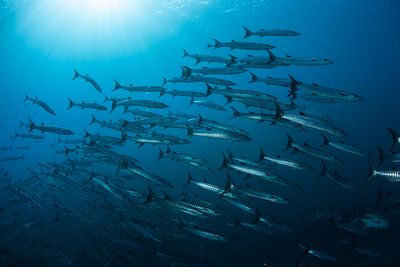 Four Kings comprises four underwater pinnacles, three of which
are connected by a ridge. The shallowest pinnacle starts at seven
metres descending down a narrow gap (15 metres) to the other three
pinnacles. The dive site itself is a playground of colourful soft
corals, schooling barracuda, trevally, turtles… the list goes
on. 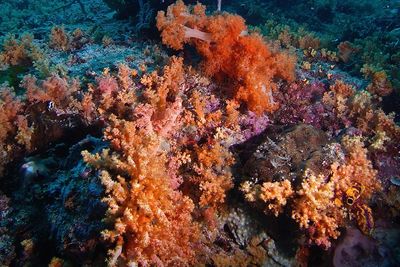 Picture all the colours of citrus. That’s Citrus Ridge. An
explosion of yellow, orange, pink, purple and green soft corals
drape the sloped reef, itself home to such a huge variety of marine
life it’s often affectionately referred to as an aquarium; from the
thousands of glassfish that dance over the corals to lurking
wobbegongs; whirlpools of barracuda, surgeonfish and batfish to
expertly hidden macro critters. This is one of the most beautiful
dive sites of Raja Ampat. 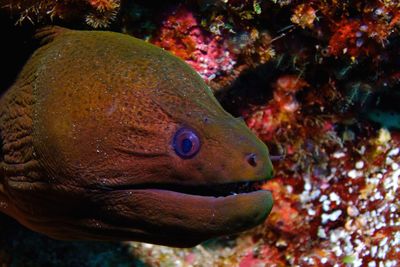 Located to the East of Kri Island, Cape Kri might just be the
most famous dive site in Raja Ampat (if not the world) due to its
mind boggling diversity – it has a record number of reef fish
species recorded in a single dive (374, incidentally). Ever. Think
white-tip reef sharks, grey reef sharks, moray eels, groupers,
tuna, turtles, trigger fish, napoleon wrasse, cuttlefish,
porcupinefish… you get the gist. 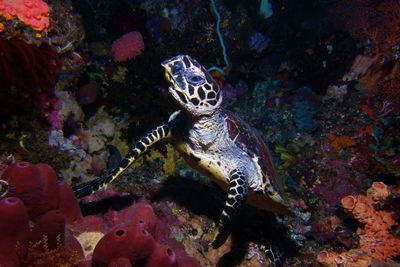 Located in the blue ocean between Mioskon and Cape Kri, this
site is quite simply magic (see what we did there?). The underwater
pinnacle starts at seven metres, descending to around 30 metres.
It’s topped with a variety of corals (from sea fans to sponges,
soft to hard corals) and as you descend look out for huge schools
of barracuda, octopus and black tip, white tip and grey reef
sharks. But the best part lies in the cleaning station for oceanic
manta rays – grab a good spot and watch them glide inches from your
face.