Hawksbill sea turtles are among the most desirable encounters while snorkeling or diving along tropical coral reefs. We have selected some fun information and curiosities to help you enjoy these marvelous encounters even more.

Check out the best places to swim with hawksbill sea turtles!

Hawksbill sea turtles are agile marine reptiles that inhabit coral reefs. Being a small to medium size turtle, the carapace of a hawksbill can reach a maximum length of 45 inches (114 cm), and they can weigh up to 190 lbs (86 kg). They have a flattened body shape and the head, which is small and sharp, ends with a “beak” that might remind you of a hawk.

As with every sea turtle, the shell is made of the carapace (dorsal) and the plastron (ventral). The carapace is made up of overlapping scales, traversed by light, dark and golden shades. The plastron is yellowish. The forelimbs of hawksbill turtles have two claws on each flipper. 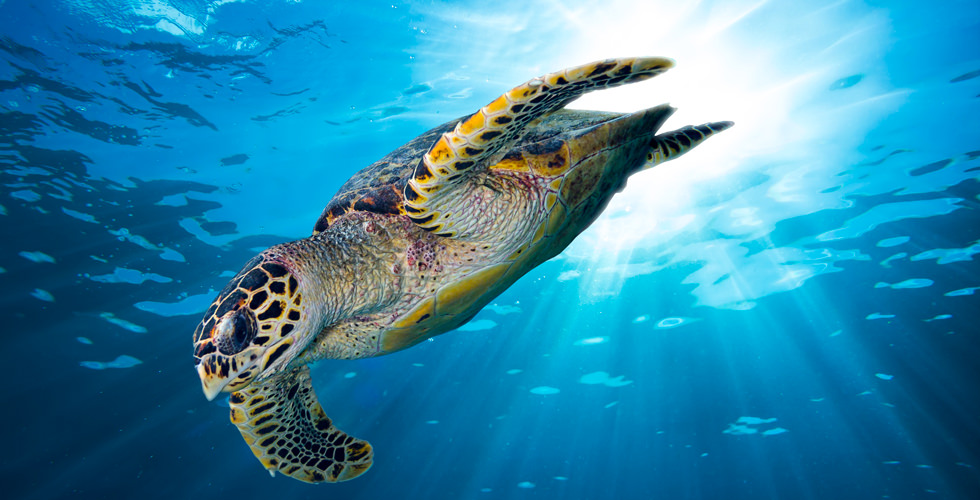 Where can I go diving and swimming with hawksbill sea turtles?

We have created a list of the 10 best places for diving and swimming with sea turtles!

How many eggs do hawksbill turtles lay in one nest?

They lay the largest number of eggs in the group of sea turtles. On average, we find 60 to 200 plus eggs in a nest. Females lay eggs every 2 to 3 years, and nesting occurs in at least 70 countries.

Why do hatchlings emerge together?

Because their chamber is deep, and they are small. So opening their eggs together makes climbing to the surface easier. In addition, it reduces the risk of being eaten along the way to the sea. If they came out alone, they would be easy prey.

Their lifespan is around 30 to 50 years.

How many hawksbill turtles are left?

The population estimate is between 20,000 and 23,000 nesting females. Their major threat is the tortoise shell trade that started over 2,000 years ago with Julius Caesar and has only increased in the past decades, bringing these turtles close to extinction.

How can I see a sea turtle nesting or their babies?

You have to go through serious, turtle-friendly operators. Check out our top 10 list to get more info.

Fortunately, there are several groups of experts who have founded associations which protect these animals through research, education, training and habitat protection.

Special thanks to Agnese Mancini from Hepca and Alessandra Sulis.